How to get started as an application developer?

I needed to dive into Juju and Charmhub, so I used this tutorial:

See this annotated PDF for some notes. how-to-use-microk8s.pdf (63.4 KB)

At the end of the tutorial my mental model is:

I use the Juju CLI to send instructions to the controller pod. The controller manages the MariaDB instance.2048×2048 99 KB

Suggested tutorial (or does it already exist?)

Overall, this was useful, but I think it would be worth introducing Juju + microk8s to an application developer specifically, so that they can:

I am a server application developer (including microservices). I can write an application, install it on an Ubuntu server and hook it up to a database and other resources. I can also configure (for example) a load-balancing web server.

I am not familiar with Juju or Kubernetes, but I understand they will make things like deployments, upgrades and scaling easier.

Let’s take a simple Django application and deploy it to microk8s using Juju. The application has two components, the Django code and a PostreSQL database:

We should be able to:

Now that we have a basic application running, we should be able to:

Hi, some of this might overlap with this tutorial, though I think your outline is clearer and doesn’t assume as much knowledge as the tutorial.

The tutorial that you mentioned is on our roadmap to be published as an official Juju SDK tutorial. Timeline, end of the January 2023. Key target for my tutorial is to explain how to create charms for K8s and integrate with other charms.

I would be glad to have a chat/call and discuss if something is missing.

Hi there, Do you mean the tutorial David linked to: Juju | How to use MicroK8s with Juju ? If so, I have some feedback!

FWIW, after skimming through, I ended up with a diagram that is slightly different from yours: 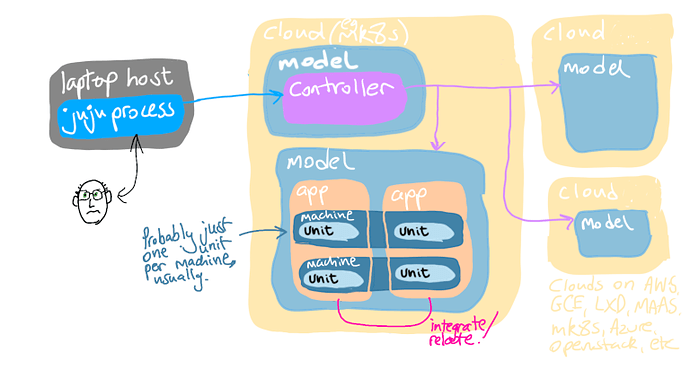 I am about From Zero to Hero: Write your first Kubernetes charm - doc - Charmhub